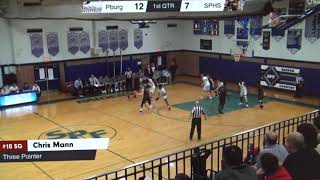 SCOTCH PLAINS/FANWOOD — Minus the first quarter, Scotch Plains-Fanwood played a solid game, kept afloat by pressure defense and the three-point ball. But by the time the Raiders heated up, the damage had already been done. It didn’t help the Raiders’ cause that Phillipsburg seemingly could not miss a shot early in the contest. A strong seven-seeded Phillipsburg team came into Scotch Plains, opened in a devastating 3-2 zone defense, and erupted for 23 first quarter points. Tha